About Bill B. Berke

Bill B. Berke grew up in the Tenafly New Jersey area and is a graduate of Riverdale Country School in Bronx, New York in 1979. Mr. Berke received his Bachelor of Science in Business Degree from Indiana University in 1982 and subsequently achieved his Juris Doctor Degree from the University of Florida, College of Law in 1985. In 1986, Mr. Berke opened his own law firm and has been representing injured and disabled individuals in Southwest Florida since that time. Mr. Berke owns Berke Law Firm, P.A.

Mr. Berke is a former trustee and former board member of the Cape Coral Chamber of Commerce, he is a board member of the Southwest Florida Hispanic Chamber of Commerce, and a Board member of the Nations Association. Mr. Berke founded and is co-chairman of the SSRI Litigation Group of the American Association for Justice. Mr. Berke strives to continue his education and participation as a dedicated activist for his clients. Mr. Berke is a frequent lecturer for workers’ compensation and FLSA Overtime issues and helped in the foundation of the Lee County Chapter of V.O.I.C.E.S. He has also written a book “How to Win Your Social Security Claim”. 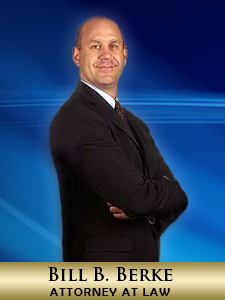